Original artwork for Aesop, created by me. 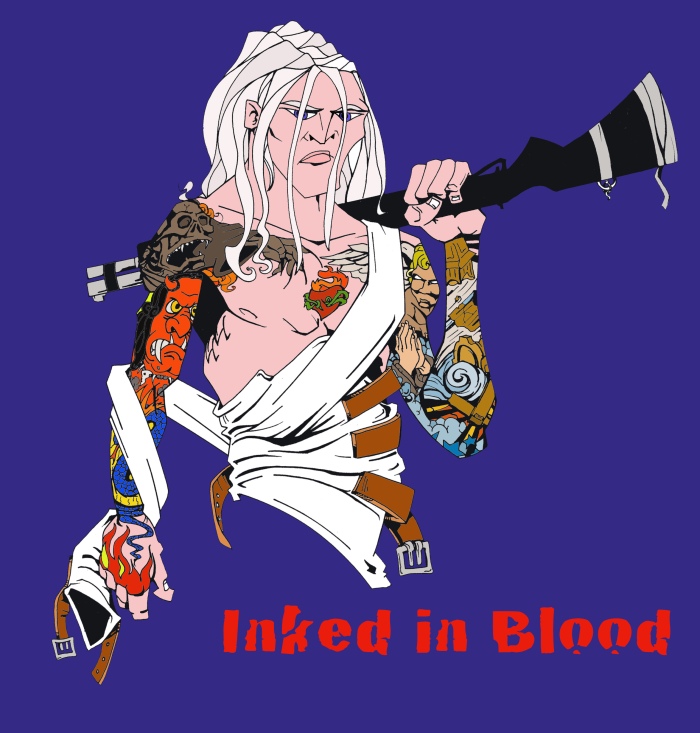 The front window is spotted with fresh raindrops. Mona works on a crossword puzzle at her desk. A few powdered donuts and a cup of coffee sit within arms reach. A light dusting of powdered sugar covers her chin.

Aesop walks through the double doors behind her, unnoticed. he grabs Mona by the hair, snapping her head back. Her eyes bulge with fear as she recognizes him.

NURSE MONA – You-you shouldn’t be out of your room.

AESOP  –  Your problem, Mona, is that you’ve become unsympathetic to the human condition. Let’s fix that–

Aesop slams her head on the desktop. Her body slides out of her chair and flops heavily to the ground. Aesop dumps the contents of Mona’s purse on the counter.

He takes her money and car keys.

First of all, I write in coffee shops most of the time. That's right, I'm that guy, but listen, there are too many fucking distractions at home. I have two amazing dogs - Nickels and Thor, that decide when the computer is in my lap, it's time for me to pay extra attention to them. And then there's the TV, video games, books, etc. All these things play into my avoidance of writing and therefore amp up the degree of self-loathing I feel at not writing on any given day. And writing is such a solitary game that it's nice to at least be around other humans while I'm tooling around inside my brain. I spent a good part of my youth moving around the country. I’ve lived in Maryland, Florida, Texas, back to Maryland, Northern California, Illinois, and Finally Southern California (Los Angeles), where I’ve been for thirty-one years. I grew up wanting to be a comic book artist/storyteller, or rock star (drummer). In my twenties, I dropped out of art school to pursue fame and fortune and convinced my bandmates to pack up their lives in Chicago and move with me to Los Angeles. I loved being on stage and performing. I loved the attention, but not the spotlight... I should probably seek professional help for that. We came close, but in the end, it didn’t work out. The band broke up, and I was tired of being a poor musician - it’s no joke, I lived on Ramen and Mac and Cheese. Through a friend, I got a job in the film industry, and I’ve been there ever since. I never gave up on my artistic endeavors. Even after moving to LA, I still took art, animation, and photography classes. I wrote hundreds of songs while in my band (that I never showed anyone), and continued to write and draw my own comic book stories. It was on the set of Deadwood that I was inspired to write screenplays. Day after day of watching David Milch work, his process, his grasp of character, story, and his interaction with the actors, really opened my eyes to a new world of storytelling. I began taking classes in screenwriting and story structure, trying to absorb everything I could about the craft. Early on in my writing career, I optioned a screenplay that I wrote with a good friend (JP). The Inked short has placed in the final round of several short screenplay competitions and Inked In Blood the feature has won several contests, including the Table Read My Screenplay - Park City, the WildSound contest, the 2017 Depth of Field contest, and the Festival of Horror. In 2018 Inked was a finalist in the Inroads Screenwriting Fellowship and this year it is a Finalist in the 2019 Underground Indie Film Fest, and the Table Read - Hollywood competition. My screenplay “A Life Unravelled,” is a Finalist in the 5th Annual WideScreen Film Festival. View all posts by mywritersroom

This site uses Akismet to reduce spam. Learn how your comment data is processed.